The worst part of this job was removing three layers, plus the backing of the original layer, of wallpaper. The original layer had been painted a deep rose color, and the backing was stuck. I wasn't sure about how the crummy surface would take paint, so the paint guy recommended a special (very expensive) primer. It worked!
The second worst part was removing the smelly carpeting. The backing stuck and I didn't think I'd ever get it clean. I did the best I could with what I had. Surprisingly removing nails, staples and the tack strips was relatively easy. We decided to move the desk across the room to disguise all the stains. Oh, and painting the baseboard near the paneling with a little, teeny tiny paintbrush. I initially wasn't sure that the color (Benjamin Moore Salisbury Green, from the historical collection) was dark enough, but I love it now. I think it's perfect with the paneling. I also think painting the paneling white would have been a mistake. I thought of trying to remove the paint off the baseboards and staining them but that would have been an enormous project, plus there's white trim around the window. It's all kind of mismatched, but it is what it is. What's left is to get a ceiling fixture from my brother and have my brother-in-law install it and replace two electrical receptacles. I also need to replace a white switchplate with a brown one. 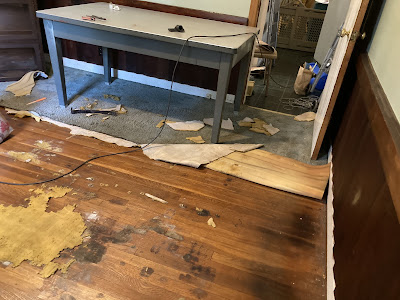 These curtains were made by my mother with Waverly fabric for my condo years ago. 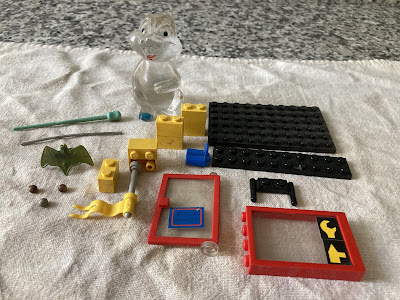 These are items found under the rug, under and in the radiator and under the baseboard. Mostly Lego pieces, but the bat ring is cool, as is the plastic chipmunk. There was also a bobbin and three common pins.
Posted by Durf at 4:06 PM
Labels: future plans, Painting - interior, renovations