I love my house so much that my family says "my house" in hushed, sacred tones when I start talking about it.  I loved the kitchen and I think that's what sold me on it.  That and the fact that the neighborhood was so quiet, with few houses.  I loved the three-foot by five-foot windows.  There was so much light!  There's even a Dutch door in the kitchen.  I was used to living in a condominium that felt like a cave; it got so little light.  For an old house it was surprisingly open-feeling.  The previous owner had made a half-wall between the office and dining room, made a doorway from the office to the parlor, widened the doorway between the living room and dining room, and removed three doors from the entry area.

I also sometimes wish I hadn't redone the kitchen and had brought in moveable items, like a Hoosier cabinet.  It seems a little too slick now.  Plus maybe I should have left the floors alone and just put polyurethane on top.  Of course, I got a gigantic sliver in my foot due to damage left behind from when I removed the wall-to-wall carpeting.
Cute Craftsman-style doors.  Victorian houses often had two entrances - the formal one for guests and informal one for family. 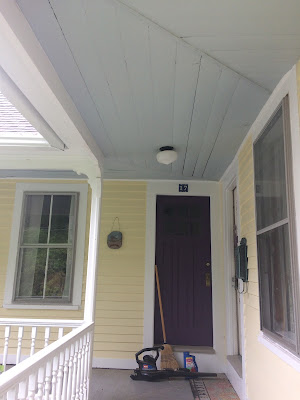 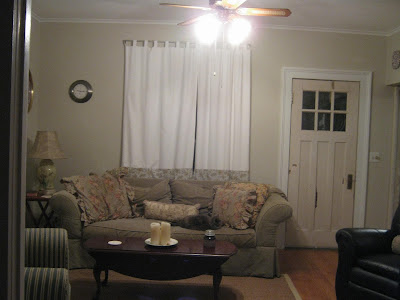 So I love my little house.  I guess, though, that I'll close up the door the office from the parlor because I bought a TV credenza and large smart TV, and the only sensible furniture arrangement is the one below. 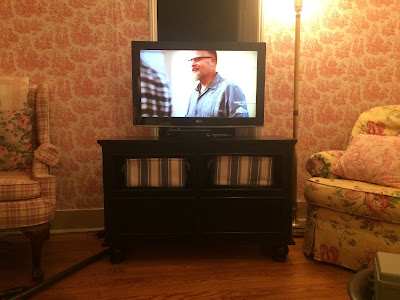 I haven't shown the second floor because it all needs re-doing.  The floors are random-width soft pine, which have been stained around the perimeter in the master bedroom and painted brown in the guest room.  I'm still trying to get a bathroom installed as well, but the cost may be prohibitive.
Posted by Durf at 10:46 PM
Labels: future plans, renovations